Climbing on a Super Puma helicopter, on an Allegro train traveling over two hundred, and observing missions on a guard ship Turva. Reetta Siltasalmi-Kautto, service designer for Erillisverkot, has toured the Finnish Border Guard’s facilities to learn about the authorities’ activities. She utilizes the information she collects in the development of Virve 2.0, the next generation of the authority network in Finland.
authority radio networks Border Protection virve
18.2.2020
Text Henna Rautiainen , Images Jaakko Lukumaa

Climbing on a Super Puma helicopter, travelling on an Allegro train doing over two hundred kilometres an hour, observing missions aboard the offshore patrol vessel Turva. Reetta Siltasalmi-Kautto, service designer at Erillisverkot, has toured Finnish Boarder Guard sites to learn about the operations of the authorities. She will use the information in the development of the Finnish next-generation administrative radio network, Virve 2.0.

The rotors are rotating fiercely and a pressure wave raises dust from the grass next to the tarmac when the Finnish Border Guard’s Super Puma helicopter takes off, then disappears into the horizon.

This time, it is not an emergency case but a pre-scheduled mission. The chopper is transporting maintenance personnel and equipment to the Kotka lighthouse – its monitoring equipment is in need of maintenance.

“Some of the missions – such as drills and lighthouse maintenance – are ones we know well in advance. Of course, if we get a more urgent mission, we will take care of it first,” says Mikko Ketonen, a flight mechanic working at the Helsinki Airport.

Communications between the authorities must work effectively, reliably and safely in all situations. This is secured by the administrative radio network Virve. 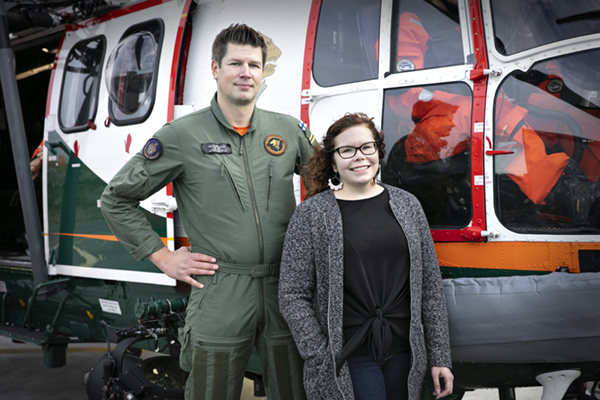 Flight mechanic Mikko Ketonen has been working for the Finnish Border Guard since 1998. He is a member of both the maritime rescue helicopter’s on-call crew and helicopter project as a systems and test flight expert. “The technical systems of all of our choppers are currently being upgraded, and Virve phones are also added to the cabin,” he tells Reetta Siltasalmi-Kautto, service designer at Erillisverkot Group.

“I encourage the use of imagination”

The cornerstone of the Virve network will renew in the next couple of years with a transition from the current Tetra technology to a commercial operator’s mobile network. Erillisverkot Group, the provider of Virve services, will select the operator whose 4G network will be used as the platform for the next-generation administrative radio network through competitive bidding in 2019.

The authorities increasingly need images and video for their communications, which places new demands on the network. With the next-generation Virve 2.0, the authorities can, for example, transmit video from an accident site to create a more accurate situation picture. Broadband also facilitates other heavy-duty data transfer.

Reetta Siltasalmi-Kautto, who is developing the Virve 2.0 service as a service designer at Erillisverkot Group, says that going forward, the new technology needs to work reliably on land, sea and air.

“At this point, it is important to carefully listen to what the customers want. Since April 2019, I have been touring to learn about the operations of different organisations. I have said that I am happy to receive all wild, good and bad ideas. Therefore, I encourage the use of imagination: at Erillisverkot Group, we then take a look at what is technologically feasible.” 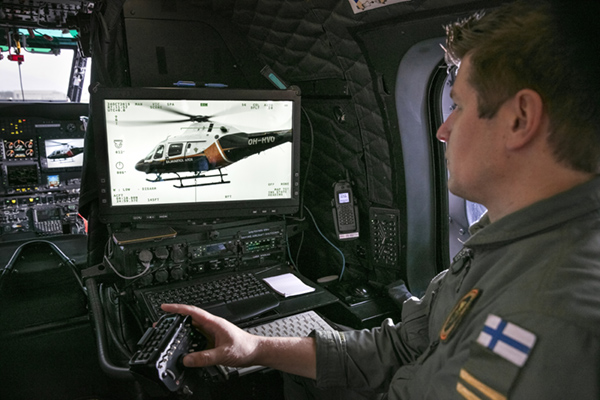 When the Super Puma receives an alert, Mikko Ketonen is tasked with operating the surveillance systems of the helicopter. “There are lots of unforgettable missions, and they often involve children. One was the sinking of a boat off Porvoo: we rescued grandparents, three grandchildren and a dog. Finding a three-year-old child who had disappeared in Klaukkala in the night during a cold season in good condition is also a moment you won’t forget.”

So far, Siltasalmi-Kautto has visited some 15 sites, ranging from the Finnish Border Guard’s Air Patrol Squadron to fire stations and emergency care units, and seen concretely how the Virve devices are used. She has climbed fire engines, examined the Super Puma helicopter from floor to roof and learned about how the offshore patrol vessel Turva works.

“The visit to the Allegro train service between Helsinki and St. Petersburg, for example, made it clearer to me why it is important to learn about what our customers do. The train runs at a speed of 220 km/h, and border and customs officials work standing in corridors. The speed is amazing, and you can’t stand without holding on to something. Yet they need to operate the Virve devices fluently and easily.”

“Virve must work in the air and below the surface”

According to Reetta Siltasalmi-Kautto, Virve is already now the world’s best administrative radio network, and Erillisverkot Group wants to make it the best in the world going forward as well.

“This kind of service development – learning about our customers’ day-to-day work – is something new to us. However, the only way for us to succeed is to develop future technology with a keen ear to their needs. It is extremely valuable to the development of Virve 2.0 to receive feedback directly from the users.”

Mikko Ketonen, flight mechanic at the Finnish Border Guard’s Air Patrol Squadron in Helsinki since 1998, praises the fact that different authorities’ wishes, criticisms and needs are genuinely taken into consideration.

“From day one, it has felt like they want to listen to us. We have special needs for the Virve network, most of which concern adequate coverage. The Virve devices need to work at an altitude of three kilometres in the air, and every now and then our maritime search and rescue helicopters operate dozens of kilometres off the coast. The communications connection also must not break off when a rescue swimmer is in the sea and the devices are momentarily underwater. 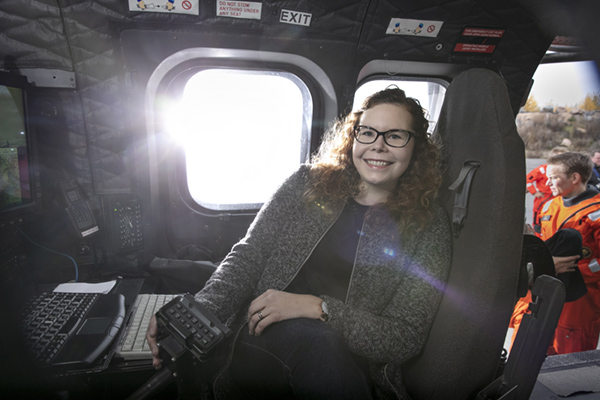 There have been lots of eventful and even physical situations while Reetta Siltasalmi-Kautto has been learning about the operations of diverse authorities. “It is easier to understand the day-to-day operations of our customers after seeing in practice the situations and conditions in which Virve devices are used: they must resist both heat and cold as well as water and disinfectants.”

The Finnish Border Guard has five medium-heavy Super Puma helicopters in Finland, with room for five crew members and 10–15 passengers, two Bell 412 helicopters with a crew of four and a maximum of ten passengers, four single-engine A119 Koala helicopters and two Dornier maritime surveillance planes.

“We are living in interesting times for the entire history of the Air Patrol Squadron, as some kind of modification is currently being made in each of our helicopter types. We are updating the avionics and surveillance systems, radio equipment and communications equipment. For example, we are installing additional Virve terminals on the 412 helicopters. Previously, they only had Virve phones available to the pilots, and now they are being added to the cabin as well, similarly to the Super Puma,” Ketonen says.

A helicopter can cope even with a fierce storm

The Finnish Border Guard got two state-of-the-art H215 Super Puma helicopters in 2016. According to Mikko Ketonen, they considerably increased the capability of the Air Patrol Squadron.

In addition to the Border Guard’s statutory tasks – territorial surveillance and maritime search and rescue – its tasks include mutual administrative support to diverse authorities. For example, it assists the police in missing person search missions on land, and the H215 helicopter’s high-performance thermal camera has helped to find many missing persons.

Robust helicopters cope even with fierce conditions, such as nighttime rescue missions amidst the autumn storms of the Baltic Sea.

“The on-call crew of the maritime search and rescue helicopter includes two pilots, a flight mechanic, a paramedic and a rescue swimmer. The situational awareness of the entire crew remains good, as both the cockpit and the cabin feature large screens that can be set to display the same views, if necessary, such as radar screens, maps, winch camera and images from the extremely accurate thermal camera.” 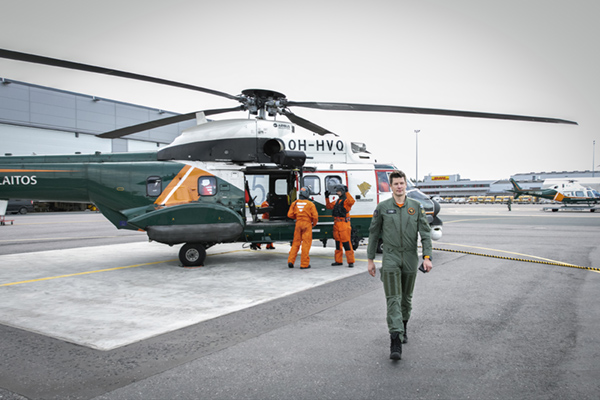 The Border Guard’s helicopters are on duty 24/7. In an emergency, a maritime search and rescue helicopter takes off within 15 minutes during office hours. “The disturbance-free operation and coverage of the Virve administrative radio network are essential to our success. It would be useful for Virve 2.0 to have e.g. a playback function so that the last ten messages, for example, could be replayed easily by clicking,” Mikko Ketonen suggests.

The Super Puma helicopter proved its worth in the M/S Estonia rescue mission in September 1994, for instance.

“We can provide effective emergency care to injured people already in the helicopter: Super Pumas are equipped similarly to an ambulance, featuring a defibrillators, oxygen supply system, ventilator, suction device and stretchers. The helicopter can operate for four hours without refuelling,” Ketonen says.

In addition to the Border Guard, Virve is used by rescue services, the police, the Defence Forces, Customs, social and healthcare services, diverse ministries and other agencies in charge of the security and functioning of the state and municipalities. Every week, 50 million messages are transmitted via Virve.

Nowhere else in the world are the authorities’ communications and cooperation as effective as in Finland. The construction of the Virve network began in 1998, and coverage of the whole country was achieved in 2002. It makes secure group and individual calls, emergency calls and SDS messages possible reliably, including when the network is congested.

According to Mikko Ketonen, Virve tore down the last barriers between different authorities.

“Communications and situational awareness are top-class. We can communicate from the chopper with the local rescue services extinguishing a forest fire, police officers involved in a missing person search, between aircraft or within the Border Guard with a patrol boat or an individual border guard officer – the umbrella is really astonishing.” 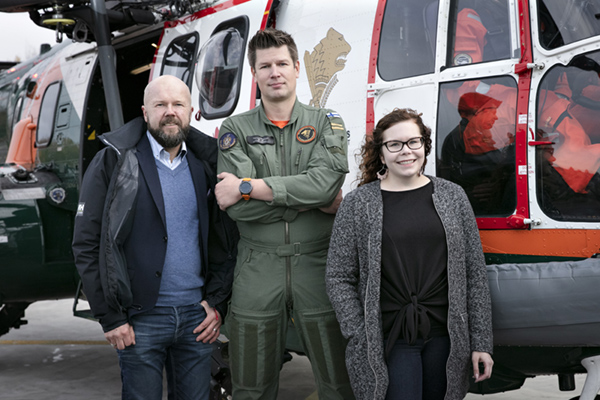 Kimmo Komulainen, customer account manager at Erillisverkot Group, points out that patience is a virtue. “We will continue to work with Virve 1.0 until at least 2025, so it is still worthwhile to invest in it. Virve 2.0 will be a next-generation product, but in the meantime, one should not deploy any applications downloaded from the web, as they are not secure enough for use by the authorities.” Mikko Ketonen and Reetta Siltasalmi-Kautto agreed.

The aircraft of the Air Patrol Squadron handle most of their communications via Virve. Ketonen laughs, saying that he is something of a technology freak and eagerly looking forward to the new features of Virve 2.0 and testing and using them.

“I believe and hope that the data transfer rate will be revolutionised. Going forward, transmitting real-time video via Virve 2.0 will help in forest fires, for example, allowing us to transmit information about the area on fire to the rescue services from the helicopter during the firefighting effort. Or in a maritime rescue mission, the control centre can see the situational picture from the site and use it to support the management of the situation.”

The first-phase data connections of Virve 2.0 are estimated to be available to customers in 2022. The current Virve will be used simultaneously with the new network until at least the end of 2025.

“Perfect systems do not exist – that must be understood right away – but I believe that during the lifecycle of Virve 2.0, we will solve problems together and the outcome will certainly be great,” Ketonen says.

Procurement of mission-critical services in the Virve 2.0 development project begins 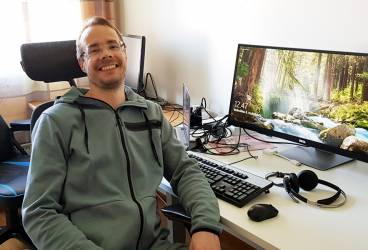 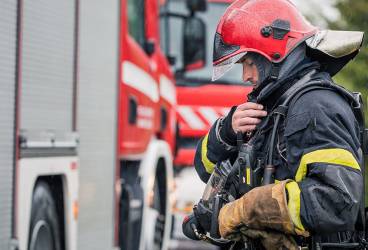 Virve 2.0 to enable world-class cooperation between the authorities also in the future

Erillisverkot Group partners with Elisa and Ericsson in the execution of future public safety network Virve 2.0 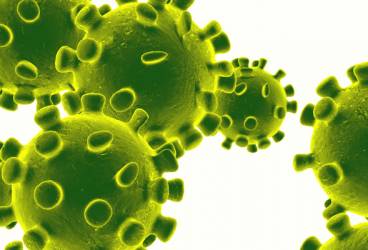 Coronavirus highlights the need for communications by and between the authorities